The USA’s GDP vs China and the World 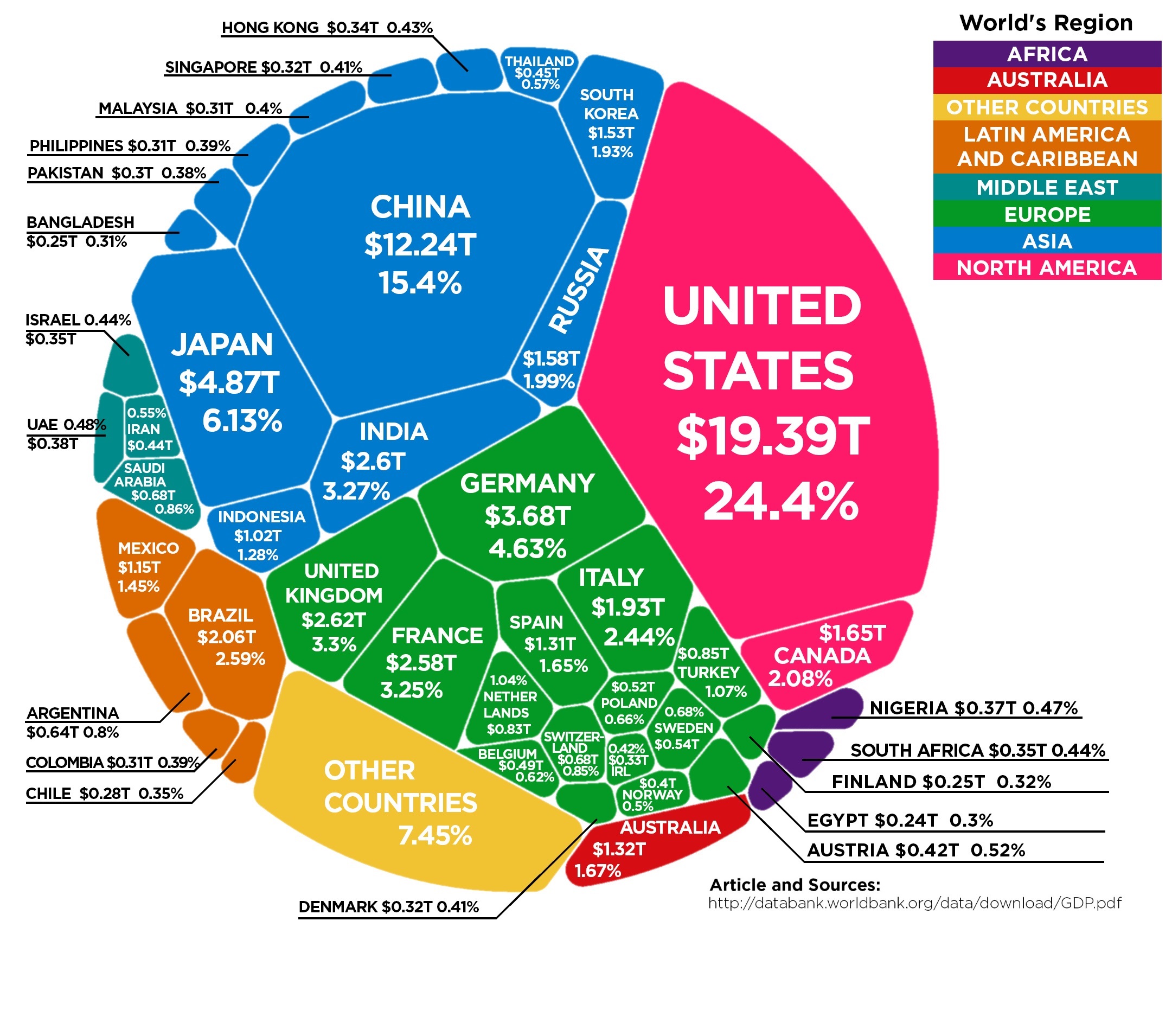 Open any newspaper or tune in to your favorite news channel and you will find much talk about how China is taking over the world’s economy. They have made incredible strides in building infrastructure, manufacturing and their military during the past few decades.  In fact, there’s so much talk today about their incredible growth rate and the power of their economy; we may forget just how good we are doing in the United States.

The magnitude of what they have accomplished in such a short period of time is amazing. They’ve literally flooded millions of people from their rural hometowns with the Three Gorges project and forced them to move to the cities. They are relocating 250 million people, according to a NY Times report, from the countryside to the city, from farms to factories.

Whether it’s a national news channel or an every day American, many believe that our country’s best days are behind us.  One easy way to understand if the economic growth of the USA is healthy is to examine our GDP vs. world GDP.  GDP = Gross Domestic Product. It’s the total of all the goods and services each country provides to the world economy. The table below with data from World Bank has some statistics for comparison: 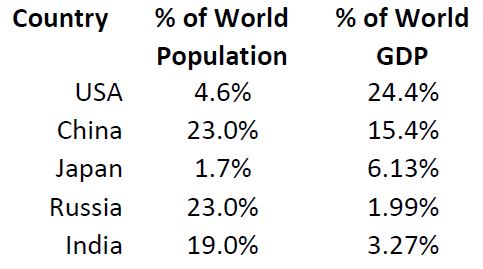 The USA is still way ahead of other countries!  We are 80% smaller than China, yet we are almost double their GDP.

A strong economy brings great wealth. The rule of law and personal property rights are two of the most basic principles of a capitalistic economy. The USA maintains both.. Not so much in China. Hence, the emerging problem in China.  The Chinese can create excessive amounts of wealth and then what? Many leave China and they take their wealth with them. That is because at the end of their life someone in the Chinese government is just going to take it.  But in the USA, it is different. Your cars, investments, homes and possessions. You get to determine the final distribution of your possessions.  That’s personal property rights and the rule of law protecting you. Two totally different philosophies!

Examining the table further, Japan is the third largest economy. Remember what everyone said about Japan in the late 80’s? Japan was faster and more nimble than the USA. Well, their economy peaked in 1989 at 13.9% of the world’s GDP. Currently, Japan produces 6.13% of the world’s GDP.

India and Russia both have a large population and are nuclear powers. Combines they have 42% of world population. Yet, combined at 5.26% GDP, they do not even exceed Japan!

Recently, India’s economy is growing enormously. They also have personal property rights similar to the USA. They maintain the rule of law and are the world’s largest democracy. India has been working industriously to grow their economy. If there’s one country on this list who has the potential sometime in the future to better the US in GDP, it’s most likely India.

The Russians have always been on everybody’s radar. A significant amount of their GDP involves energy production but their growth has all but stagnated.

This is a lot of information to consider. The USA is the most productive country on Earth. No other country is even close.  China has had a 1000 year head start on us. (How come we don’t hear about this on the news every night!)

The constant talk of a trade war and tariff’s is overblown. Many people believe it won’t affect the USA much in the long run. We have had tariffs for years. Our trading partners had tariffs against us which were usually higher. For example, we held a 2.5% tariff on German cars being imported into the US but paid 10% on US vehicle entering into Germany. Very lopsided and ignored by our politicians for a long time. We’ve had trade wars before. We survived because we are very resilient and the rest of the world relies on our productivity. A trade war and tariff’s will hurt the Chinese economy much greater and my guess is they will eventually come to the table and negotiate a fair deal for everyone.

We are in a very strong negotiating position in the USA. Our people have always been driven by independence, innovation, and the pursuit to do better. We attract some of the greatest talent of the world to increase our productivity and lead the way in industry after industry.

Final thought: The United States of America isn’t going to relinquish our top GDP title anytime soon. Someday it may happen- maybe it will be India- but it will be a long time from today.

Recent News from our Financial Advisors

Tough TimesWhen times get rough, the natural human urge becomes one of extreme frugality. Certainly those who survived the Great Depression developed various habits prompting others to view them as “penny pinchers.”Well, today, those sitting...

END_OF_DOCUMENT_TOKEN_TO_BE_REPLACED

How Are Your Investments Doing Lately?  Receive A Free, No-Obligation 2nd Opinion On Your Investment Portfolio > July 25, 2022Our Mission Is To Create And Preserve Client Wealth A lot of people are worried that a recession may be in our future. Some...

END_OF_DOCUMENT_TOKEN_TO_BE_REPLACED

Treasury Note is simply the yield at the close of the day on each of the historical time periods. Sources: Yahoo! Finance, MarketWatch, djindexes.com, London Bullion Market Association.Past performance is no guarantee of future results. Indices are...

END_OF_DOCUMENT_TOKEN_TO_BE_REPLACED

July 11, 2022Our Mission Is To Create And Preserve Client Wealth Rising inflation is a bit like a child throwing a temper tantrum in the grocery store.The red-faced parent, in this case the U.S. Federal Reserve (Fed), tries to calm the child. Sometimes, it...

END_OF_DOCUMENT_TOKEN_TO_BE_REPLACED

June 20, 2022Our Mission Is To Create And Preserve Client Wealth The fight against inflation intensified.Last week, the Federal Reserve (Fed) delivered a message that it is serious about fighting inflation. The Federal Open Market Committee (FOMC) lifted...

END_OF_DOCUMENT_TOKEN_TO_BE_REPLACED

Inflation is proving to be far more tenacious than financial markets had hoped.The idea that inflation peaked in March was put to rest last week when the Consumer Price Index (CPI) showed that inflation accelerated in May. Overall, prices were up 8.6...

END_OF_DOCUMENT_TOKEN_TO_BE_REPLACED

All,You undoubtedly have heard reports that the world’s supply of wheat and corn are in jeopardy due to Ukraine and Russia both missing this season’s planting window for obvious reasons (click the link above to read more details). Did you know that Russia...

END_OF_DOCUMENT_TOKEN_TO_BE_REPLACED

Significant Shrinkage Buffeted by Inflation Is it time to double check your household budget? Chances are the budgeted expenditures of the vast majority of Americans are about to get buffeted. Or so says the Oracle of Omaha. In the latest shareholder...

END_OF_DOCUMENT_TOKEN_TO_BE_REPLACED

Everything we do starts with learning what is important to you. Understanding your unique story is vital in the development of a plan with your best interests in mind. Connect with us to learn more.

Our focus is on your life and priorities. Not just your portfolio. That’s why we start by listening and learning about you. Each individual client has different needs and concerns that need to be addressed. And because we carefully listening to those concerns, we will gain important information that will help us to best serve our clients and help protect their financial futures. 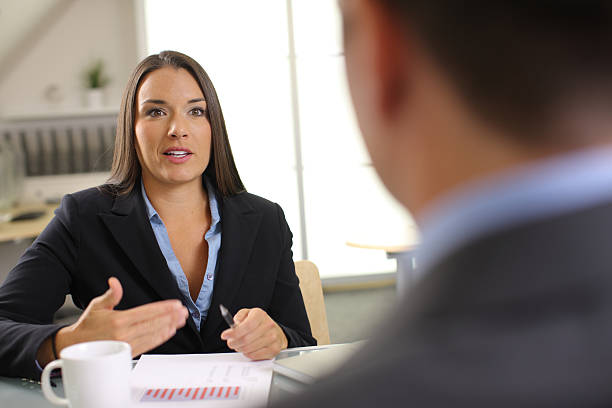 Looking to get your Financial House in Order?
Send us a Message