What are professional asset managers thinking?

Many of those surveyed were optimistic about 2021. During the next 12 months:

So, what were managers most worried about?

For the first time since April 2020, the COVID-19 pandemic was not the most pressing concern for professional money managers. That spot was filled by inflation. Ninety-three percent of those surveyed expect inflation to rise during the next 12 months, reported Nicholas Jasinski of Barron’s, and that could affect stock prices. Jasinski reported:

“…higher bond yields mean higher borrowing costs, which could hinder the recovery and weigh on corporate earnings. Plus, a higher discount rate produces a lower present value for assets like stocks. And, when Treasuries produce enough yield, there’s greater competition for stocks.”

The discount rate is the Fed’s rate for lending to other banks.

One place to look for signs of inflation is bond yields. Recently, yields on U.S. Treasury bonds have been moving higher despite efforts by the Federal Reserve to keep them down, reported Lisa Beilfuss of Barron’s. It’s possible the bond market is pushing yields up because bond investors see inflation ahead. The AP’s Stan Choe and Alex Veiga explained:

“Inflation means future payments from bonds won’t buy as much – because the price of a banana or a bouquet of flowers will be higher than it is today. So, when inflation expectations rise, bonds are less desirable, and their prices fall. That pushes up their yield.”

(The one-year numbers in the scorecard are noteworthy. They reflect the strong recovery of U.S. stocks from last year’s coronavirus downturn to the present day.)

The world happiness report is out – and it was surprising. COVID-19 has disrupted just about every aspect of people’s lives – work, home, family, friends, and health – in every country of the world. Knowing this, it seems logical people would be less happy in 2020 than they had been in previous years. However, the findings of The World Happiness Report tell a different and more complex story. The authors explained:

“Many strands of data have been pieced together to produce a picture of almost astonishing resilience…Although there were significant increases in average sadness and worry, we found that overall life evaluations, and happiness rankings, were surprising stable. The top countries before the pandemic remained the top countries in 2020, so there is little change in the overall rankings.”

The remarkable stability of happiness may also reflect the fact some of population groups are not normally included in surveys – people who are homeless, in nursing homes, hospitals, prisons, and refugee camps – were also some those hit hardest by the virus.

There was another notable aspect of the study. Young people were significantly less happy in 2020 than they have been in previous years. The Economist explained:

“[In Britain], and in other rich countries, the age profile of happiness before the pandemic struck was roughly U-shaped when plotted on a graph. People began their adult lives in a cheerful state. They became glummer in middle age. Then, after about the age of 50, they started to become happier again…Today the pattern is an upward slope. The young are less satisfied than the middle-aged, who are less satisfied than the old.”

Weekly Focus – Think About It
“Let us be grateful to the people who make us happy; they are the charming gardeners who make our souls blossom.”
–Marcel Proust, French novelist

END_OF_DOCUMENT_TOKEN_TO_BE_REPLACED 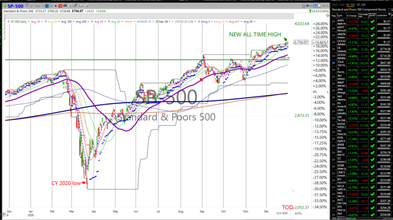 END_OF_DOCUMENT_TOKEN_TO_BE_REPLACED

Making a List and Checking It TwiceAs one of the strangest years ever thankfully draws to a close, it behooves us to take stock and see our situation as it now...

END_OF_DOCUMENT_TOKEN_TO_BE_REPLACED

The market likes President-Elect Joe Biden’s selection of Janet Yellen to serve as Treasury Secretary. Many Wall Streeters feared that Biden would appoint...

END_OF_DOCUMENT_TOKEN_TO_BE_REPLACED

When we were young, Thanksgiving was simple. It was a day off from school, or from work. A day for watching football, or for eating as much turkey and pie as we could...

END_OF_DOCUMENT_TOKEN_TO_BE_REPLACED

Veterans Day – The Tomb of the Unknown Soldier

Veterans Day - The Tomb of the Unknown SoldierOn March 4, 1921, the United States Congress approved the burial of an unidentified soldier who fought and died in...